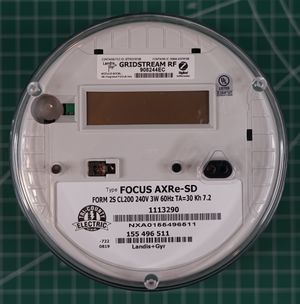 Analysis and decoding of the packets used on the Landis+Gyr GridStream mesh network.

The Landis+Gyr Gridstream smart meters use a 52 bit sync shown below regardless of Gridstream version. This can be used in GNU Radio along with the header to uniquely identify packets. Note that at the start of the header we begin using start and stop bits. These must be stripped off of the rest of the data packet during processing.

Of particular note is the difference between versions 1-4 and version 5. In version 5 there are two bits [11] that do not respect the start/stop bit checks of the prior versions. The older protocol expects a 0 start bit, bit data bits and a 1 stop bit. By violating two consecutive start bits the older versions of Gridstream ignore version 5 even if they have the same CRC Adder! This appears to be a way to add backwards compatibility to newer versions of Gridstream.

Using GNU Radio it was found that shortening the Sync requirements a bit and incorporating part of the header leads to the cleanest data for further downstream processing. The modified sync shown in 8 bit chunks is shown below.

The final byte of the sync (0x2A) along with it's start and stop bits are discarded as part of the processing.

So far only two types of packets have been observed, a 0x55 and a 0xD5 packet. Multiple lengths and SubTypes of these are listed below.

Data varies per packet type but a common theme is the 0x55 packets appear to be broadcasts from the meters with only their own ID. 0xD5 packets usually contain two ID's and appear to be how data is routed across the network. Sometimes one of the meter ID's in a 0xD5 packet is FFFFFFFF which may be a broadcast packet. This was observed when packets were sent that appear to be updating the system time of the meters.

C++ source code below used to calculate the CRC, different energy providers use a different initial CRC value. Assume this is to segment traffic, unsure if Routers/Collectors are shared by different providers to return traffic or not.

There have been two packet types observed thus far, a 0x55 and a 0xD5 packet.

The data below was captured from the same meter (F0EE36DB) and shows some of the values that can change with each transmission. Different meters have different fixed data and some of the data changes less frequently as well.

Commentary on the data fields above, they have been grouped based on sample analysis but this could be wrong. If you see a new pattern not noticed before you may be correct.

Field 13 - Timing in hundredths of a second, counts from 0 to 167.99 (0x419F) seconds then rolls over to 0 again. Credit for this discovery goes to an anonymous reader who examined the dataset at the bottom of the page!!

There appear to be multiple packet lengths and styles for the 0xD5 packet. Some samples shown below, download as a txt file.

*Note: This file does not contain the trailing bytes shown in the captures above, it stops at the 16 bit Checksum.

This table lists Real-time data requests from SmartMeterTexas.com which allows customers to request current meter readings. You will see 0xD5 packets in the data file closely linked to the times above. When the request is made on the website the meter generally responds within 10-15 seconds meaning the system can send a message to the mesh network, traverse across the meters and return fairly quickly.

Format will likely change for the files as more is learned, currently the format is: