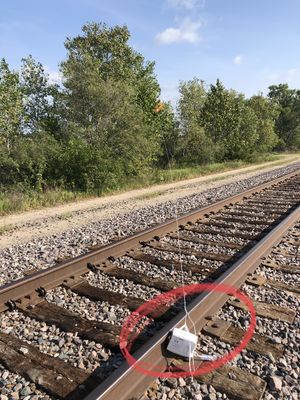 Photo of the lower panel of the 403 MHz version of the LMS-6 Radiosode. Of particular note are the DIP Switch configurations for setting the transmit frequency.
Relative Humidity Circuit section

Powering the radiosonde in the labEdit

Lowpass filter FL101, output from the CC1050. The blue trace is the S11 plot. The red trace is the S21 plot. This is from 200 MHz to 1.425 GHz. Absolute values are not to be trusted. The relative measurement indicates that the 3 dB cutoff of the filter is around 650 MHz.
Test setup for the FL101 measurement.

Ideas for doing AFSK modulation on 70CM with CC1050 and ST7Edit

Why we're not going to do 9600baud 70CM FSK modulationEdit

Interface Description and Theory of OperationEdit