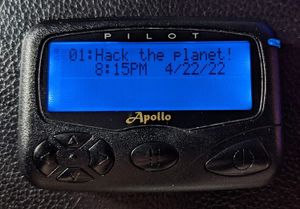 It is worth noting however, that there is also a similar model (AF-A26) which is identical, but supporting the FLEX paging protocol instead.

Do note that the first time you disassemble your pager, you will have to use a concerning amount of force to separate the halves.

This is due to sticky foam pads holding the receiver board to the back case. You may remove these when you fully open the unit and it will function fine, however you are probably opening yourself up to the RX board possibly becoming unplugged should you drop the pager at all. Use your own descretion here.

The initial start-up password for the software is AC5678 [6]. Not necessarily related to programming per se, but holding down the triangular power/function button on startup will initiate a lamp/motor/RAM test mode. You can step through the various tests with the buttons, but the battery will need to be pulled to reset it.

Hold down the center oval shaped button and insert the battery. Keep holding it until this screen appears. Should take approximately 6 seconds.

Hoping for the best, press the triangular power/function button. If the password is set to the default (0000) then you should see the frequency screen appear. If not, then your password is incorrect. Head on down to section 9, Bypassing the hand programming password.

Use the up/down/left/right buttons to enter your desired RX frequency here. Do keep in mind the common caveat of these being set to 25kHz channel spacing, so select your frequency accordingly. If an invalid frequency is entered (for example, the default DAPNET frequency of 439.9875) while the pager is in 25kHz spacing mode, it will not accept the frequency change and will beep once and reboot to the normal pager interface.

The next menu items after frequency are the RIC/CAPCODE settings. These can be enabled and disabled while retaining their values and function bits. More on the function bits below.

Still a WIP to make these fully understandable. More to come.

Set the overall LCD contrast here. Seems to default to 4 and that should be good for most cases.

Here you can enter a new passcode for the pager which will take effect on next reboot. Be sure to remember this value if you change it from 0000 as it will be needed to access the programming interface again!

Assuming everything you entered is valid and to the pager's liking, you should finish with this screen after hitting the triangular power/function button. The pager will now reboot to the main interface and your settings will be active.

Peel back the lefthand sticker to reveal three holes that expose three gold pads on the RF receiver PCB. These pads directly connect to the EEPROM SCL and SDA lines as well as common ground in that order from left to right.

The main EEPROM, a CAT24WC16, which is located on the top right of the board contains configuration information. It may or may not contain the passcode, this is still unknown at this time. This chip is a standard I2C EEPROM which can easily be read and written with several different tools.

The 24WC16J EEPROM is a standard I2C memory device. As such, it's contents can easily be read out using any I2C capable debug device or microcontroller such as the Bus Pirate or Arduino respectively. A CH341A programmer has also been used successfully to dump the contents.

I have tried replaying the same byte sequence in response, as well as sending just "Apollo" with no luck. My assumption is there must be some reply word sent by the programmer itself, similar to the DeLorme TripMate GPS which needs the word "ASTRAL" sent on it's RX pin to enable the GPS.